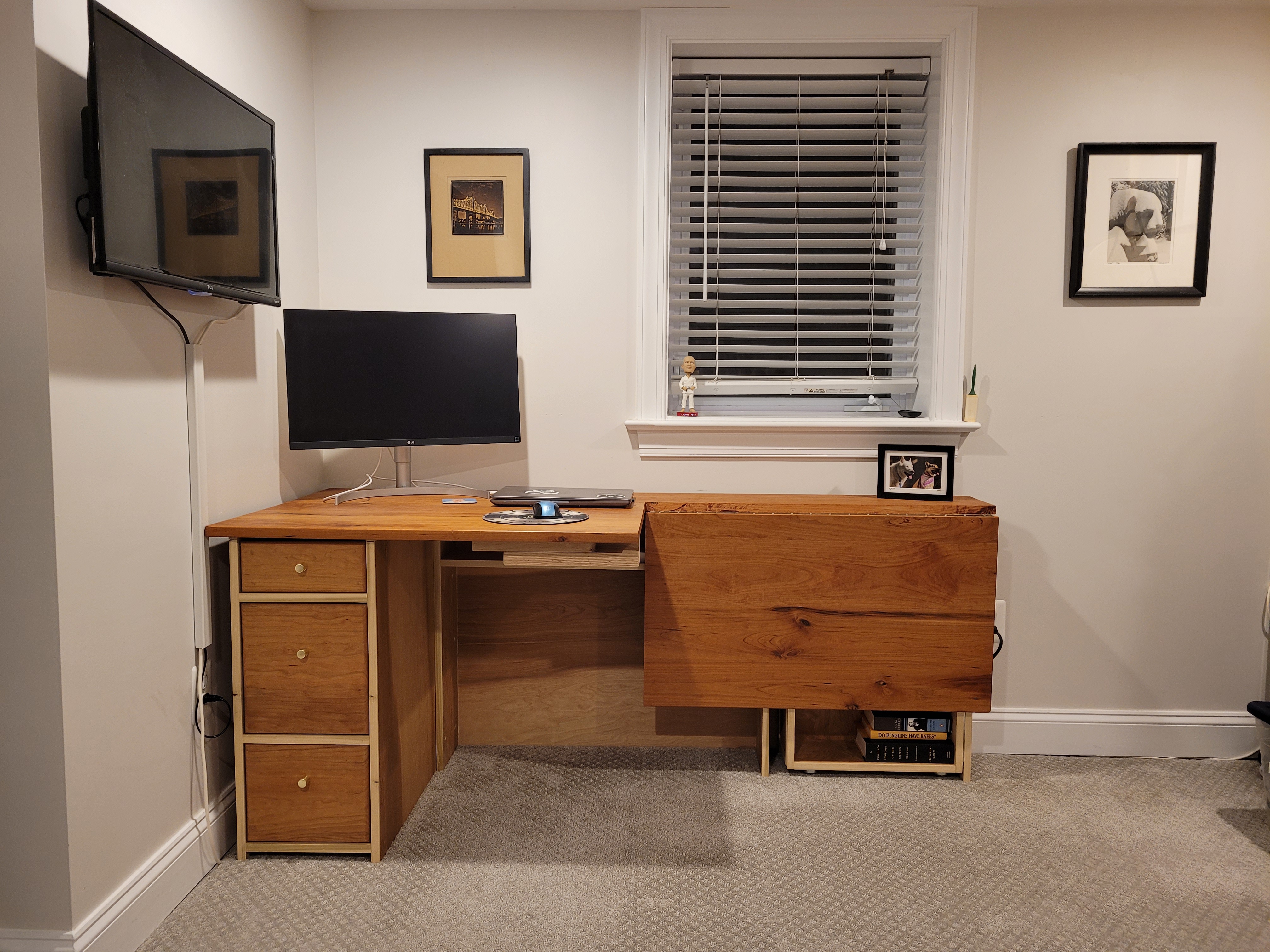 Hi, I’m Gary I live in Jefferson Manor with my wife Kristi. We have been “manorites” for 9 years and we love our neighborhood. The reasons are both easy and difficult to write about, and I would rather not sound cliché, so I’ll allow you to plug in all of those adjectives and positive phrases that you would use to describe a great neighborhood and bam, you have our hood. Our 15 or so streets that make up our community do however, have some issues, these 500 nearly identical homes have some tiny rooms. That being said, the residents have come up with some ingenious ways of making their homes unique, even if they all started out with the same 1950’s footprint. So whenever neighbors meet, the topic of home improvement is bound to come up and it’s also a very popular topic on the Jefferson Manor Facebook page.

Late last year, I was tagged in such a post, it turned out a new resident was looking for someone to build a desk and perhaps some shelves and was looking for recommendations. Just so you know, I love being a ”go to handyman” who gets tagged as such. A few days later I met with Amir and Justine, they had recently moved into a home just one street over from ours, we chatted about the job, and I told them that I couldn’t build what they wanted. Now so that you understand, it would both have movable parts and also needed to be child proof. They wanted a full size desk in the footprint, or the landing, where a Murphy bed would be when not in its upright position.

Half an hour after leaving their house, I was walking our dogs River and Rooster when I pretty much came up with the entire design of how to build this desk. Getting home I grabbed my laptop and launched SketchUP, within 3 hours I had this design.

Speaking of social media, I’m an admin of ”NOVA Woodworking Community” on Facebook which as of now has over 1400 members. One post was asking everyone to pick “Which tool in your shop is the most valuable?” For me, SketchUP is without a doubt my most valuable tool. It allows me to build something without ever turning on the table saw. Then when it comes to actually making cuts I’m more precise and confident, it’s like I’ve already made it.

I sent the plans over, the very same night after telling them I couldn’t build it. They liked my solution and my design, we exchanged lots text messages discussing all of the “what if’s” and that very night they decided to take a chance on my design and my woodworking skills. I had other projects in my shop at the time but I accepted the job, with the understanding that I could not start it until January 2022. We decided on a cherry top. I purchased the rough lumber in November as it’s best to allow the lumber to acclimate to the shop before milling.

Starting the project: Step one, clean the shop turn on some tunes and start milling

The cherry desktop under clamps, after the milling process was completed. Turning rough lumber into flat, square planks, to make a huge panel, takes time and patience and is one of the most boring things in woodworking. Each board is passed over and over through a jointer then a planer for what seems an eternity. The fun part is matching the sections prior to the gluing them up. Good squeeze out of glue is a good indication of a flat jointed board.

After the desktop was glued up, I began working on the base. The ”magic desk” – a term I got from Justine after delivering the desk – got its magic from 2 piano hinges, one would be on the cherry desktop, the other on a movable mini bookshelf. The bookshelf would extend out, to support the desktop, then fold back in to allow the cut out section of the desktop to dropdown allowing room for the Murphy Bed to be used when guest where in town.

I was feeling pretty good about my progress , then it hit me, the desk is going in their basement and I had made the base as one large section, and I knew it wouldn’t fit.

I decided to cut it into two sections. Making a cut is easy prepping for a cut can take time. This was a scary cut, I was worried about kick back (saw gets in a bind and flys across the room) or I cut it wrong and start over. It was late, I decided to sleep on it.

In true fashion whenever I’m at the shop (Tappahannock, VA) I always get up early, but this night I really couldn’t sleep. So at 5 am on a cold 12 degree morning I walked to the shop, turned on the lights, and fired up the propane heater. I lined up my track saw and made a cut. My proudest cut to date. Later that day I capped off the new section, wrapped everything in plastic. Loaded up the trailer and brought it home to finish.

In my small shop behind my house, I made the drawers and the lever that hinged to support the desk (the bookshelf would support for the outside edge, while this support is for the middle). This was my most uncertain thing to build. What I ended up with was nothing like my initial plan, in the end this small latch made of oak had me feeling like woodworking genius.

Finally delivery day came. I was so happy that I made the base 2 sections as getting it down the stairs was a breeze.

Do you see the magic? These Jefferson Manor homes are full of character, and awesome people. I’m super proud of this build. I look forward to designing and building more magical things.

This site uses Akismet to reduce spam. Learn how your comment data is processed.